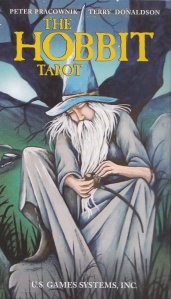 “The Hobbit Tarot” is a 78 card theme deck, following the traditional structure of the Tarot, with the overlaid theme of J.R.R. Tolkien’s work “The Hobbit”. The 22 cards of the Major Arcana are defined as the major mysteries/themes around which our lives orbit (birth, death, love … things that are universal to all of us), while the 56 cards of the Minor Arcana are said to represent situations and events in life. Traditional titles are kept for the Major Arcana, with Strength at VIII, and Justice at XI. The suits are Wands, Cups, Swords, and Coins, with the Court Card titles King, Queen, Knight, and Page.

In the introduction to the accompanying LWB (Little White Book), Donaldson notes that the world that constitutes “The Hobbit” is a world of gentle magic and mystery. He likens the journey of Bilbo Baggins to the journey that we all follow in life, clinging to what is known, with a disdain for change. Each character that was chosen to represent a particular Tarot card was chosen after due consideration. In bringing together the world of the Tarot and the world of the Hobbit, a new personae has been created. Reader response and feedback is encouraged, through the respective sites of the author and the artist.

Terry Donaldson is a professional Tarot reader, guide, and healer. He currently runs the London Tarot Centre through his shop in London. He has assisted Peter Pracownik with the creation of “The Dragon Tarot” and “The Lord of the Rings Tarot”.

Peter Pracownik is at the forefront of what is termed the Visionary School of art. He has made his mark in both the UK and American markets in the New Age/Fantasy School of modern artists. His prior work includes “The Dragon Tarot”, “The Lord of the Rings Tarot”, the “Imperial Dragon Oracle Deck”, and the “Woodland Wisdom Oracle Cards”.

The LWB presents the cards in text only – no scans. There is a discussion of the card background (greatly appreciated in a theme deck!), followed by the upright and reversed divinatory meanings.

There is a very special section where spreads relevant to the Hobbit theme are presented, including The Ring of Gollum Spread (giving a great over-view/snapshot of where the Seeker is at the time of the reading), The Sword of Aragon Spread (an expanded Past/Present/Future spread), and The Arkenstone Spread (a spiral spread that is read in storytelling fashion).

The box that the cards and LWB come in shows an illustration of the Four of Cups on the front, and the Fool on the back. The cards are 2 ¾” by 4 ¾”, of glossy card stock. The backs show a ¼” white border, surrounding a gray/blue inner background. Super imposed on the background we see the Ring of Power, complete with its script “One Ring to rule them all”. The backs are reversible.

Some of the cards in this deck evoke traditional Tarot well, some do not. The Magician is a card that works, but not in the traditional manner. All of the elements are represented, but we do not have the traditional “As Above, So Below” gesture, and the magician himself, represented by Gandalf, is older. The Hieropant, represented by again by Gandolf, works well. He is working with deep magic through the crystal on his staff, and the owl above him representing wisdom is quite appropriate. 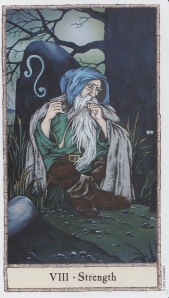 Strength shows Thorin Oakenshield getting ready to reclaim the Lonely Mountain from the Dragon Smaug. 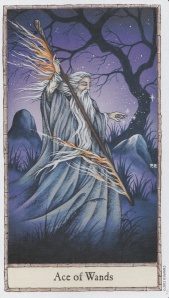 The Ace of Wands shows Gandolf with is fire-throwing wand.

The High Priestess shows two pillars holding up a royal arch. Over one pillar is 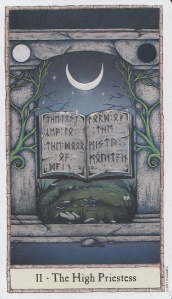 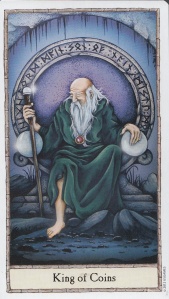 The King of Coins shows Dain the Second seated on his throne. Over his head, inscribed in Runic lettering, are the words “High Lord Dain, Son of Nain, Misty Mo…”. 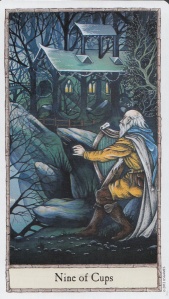 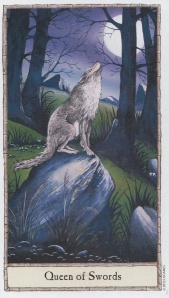 The Queen of Swords shows a female Wang calling for her pack.

The World shows the Dragon Smaug sitting atop a mountain of treasure. 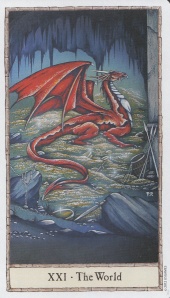 In this deck we see superimposed on the traditional Tarot a world of Elves, Dragons, Dwarves, Wizards, Trolls, and the occasional Human. This is a collectors deck for those that connect with the Hobbit theme, or those that like mystical, fantasy art. It is not a deck for beginners, and it is not a deck to learn from. As an addition to any collection, it is invaluable, as it stretches the imagination and brings new perspective to the world of the Tarot and the world of Bilbo Baggins.

Posted by Bonnie Cehovet on April 28, 2012 in Uncategorized