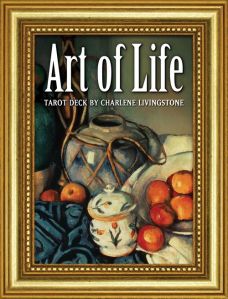 “Art of Life Tarot” is a 78 card deck following traditional Tarot lines – traditional names have been retained for the Major Arcana, with Strength at VIII, and Justice at XI. The suits are Wands, Cups, Swords, and Pentacles, with the Court Cards entitled King, Queen, Knight, and Page. 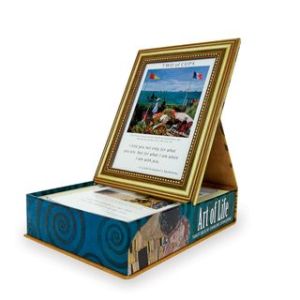 The packaging on this deck is incredible: the box itself is sturdy, with a top that lifts and folds back to form an easel for holding a Tarot card for meditation or visualization purposes. I am very impressed with the manner in which the top of the box is presented – the image is inset within a frame, so that you feel you are looking at a framed picture! The inside of the box places a beige border around the area where the cards are stored, giving the same feeling of the cards being framed.

The accompanying 31 page LWB (Little White Book) is indeed a little white book. The illustration on the cover of the book is a detail from “Breakfast In Bed”, by Mary Cassart. In her introduction Livingston takes us on a small life journey with her, speaking about a major life experience that lead to her turning more and more to the Tarot for insight and perspective. Through the interpretation of a dream, she came to realize that she wanted to create a deck of her own. She wanted this deck to be unique, with meanings displayed on each card that would engage the reader in an internal dialogue. Livingston combined her background in art history, and a lifelong passion for quotes, into this deck.

The cards are presented in the LWB with text only (no scans), with just a few keywords (no description of the card). For example (from the LWB): the Fool (Adventure, spontaneity, initiative), Death (Ending, change, mortality), Knight of Cups (Romantic, sensitive, idealistic), Ten of Pentacles (Security, affluence, domestic harmony). Keywords are also listed for the suits, the numbers, and the Court Cards. The spread presented at the end of the LWB is a five card “Creativity Spread”.

The cards are 3 ½” by 5”, which makes them harder for small hands to handle, but gives ample room for the card title, a nice sized illustration, and a quote in a font size that can be read. They have a matte finish. The card backs show a whimsical tree with spirals done in a golden brown. The card back is not reversible. The card faces show a white background. The card title runs across the top, followed by an illustration, with identifying information as to the name of the work, the artist, and where the work can be found. Beneath this is the card quote. The card titles, including the numbers on the Pips (numbered cards) are all in text.

The images in this deck are taken from the work of major artists (ala Kat Black in the “Touchstone Tarot”, and James Ricklef in “Tarot of the Masters”). The Ace of Pentacles shows a detail from “The Luncheon: Monet;s Garden at Argenteuil”, by Claude Monet. The quote, “Wealth is the ability to fully experience life.” Is fromHenry David Thoreau.

The Queen of Cups shows a detail from “Breakfast In Bed”, by Mary Cassatt. The quote, “Blessed is the influence of one true, loving human soul on another.” is from George Eliot.

The Ten of Wands shows a detail from “The Alchemist”, by Mattheus van Helmont. The quote, “Patience and fortitude conquer all things.” is from Ralph Waldo Emerson.

The King of Wands shows a detail from “Napoleon Crossing the Allps”, by Jacques-Louis David. The quote, “Self-confidence is the first requisite to great undertakings.”, is from Samuel Johnson.

The Page of Swords shows a detail from “Paul Writing”, by Camille Pissarro. The quote, “When the student is ready, the master will appear.”, is a Buddhist proverb. 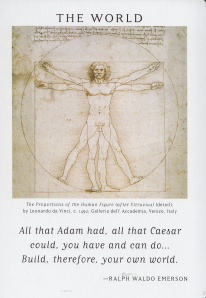 The World carries a detail from The Proportions of the Human Figure (after Vitruvius)”, by Leonardo da Vinci. The quote, “All that Adam had, all that Caesar could, you have and can do … Build, therefore, your own world.” Is from Ralph Waldo Emerson. 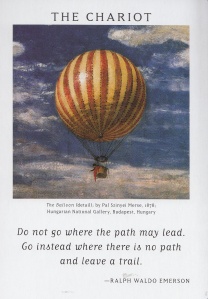 The Chariot carries a detail from “The Balloon”, by Pal Szinyei Merse. The quote, “Do not go where the path may lead. Go instead where there is no path and leave a trail.” Is from Ralph Waldo Emerson.

The quality of this deck is astounding. It can easily be used for contemplation, visualization, journeying, and self-empowerment. The images themselves will take the Seeker into another world, a world that will open up perspective and bring wisdom and healing. Care has been taken to match the energy of the picture and the quote to the traditional energy of the card. I personally intend to use this deck alone, and as a comparative deck with a more traditional Tarot deck. On its own, I do not feel that it is representative of the Tarot.

Posted by Bonnie Cehovet on May 2, 2012 in Uncategorized

This is the winning entry into my April contest for a copy of the Steampunk Tarot. Many thanks to Aphrodisiastes – this is an awesome spread! 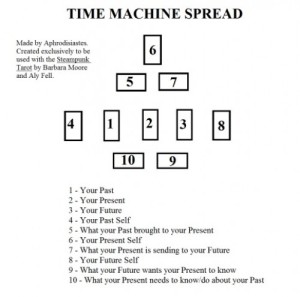 Posted by Bonnie Cehovet on May 2, 2012 in Uncategorized