HEXEN 2.0 is the sequel to HEXEN 2039, a project that Treister began in 1995. HEXEN2039 consists of drawings, interventions, a book, a film, a website (http://www.hexen2039.net/), and an event. A very spectacular event, actually. It took place in 2006 simultaneously at five London venues: Chelsea Space, the Science Museum, the Warburg Institute, the British Museum, the Goethe Institute and Ognisko Polskie. HEXEN2039 was also where Treister created a fictional alter ego, Rosalind Brodsky. Brodsky is a delusional time traveler, who thinks she is working at the Institute of Militronics and Advanced Time Interventionality (IMATI) in the 21st century. IMATI is an independent research institute, based in South London, with both government and corporate clients. Brodsky is also in charge of a research program concerning military-occult technologies for psychological warfare.

As the backstory for HEXEN 2.0, it is important to know that HEXEN 2039 revealed links between things like conspiracy theories, occult groups, Chernobyl, witchcraft, the US film industry, British Intelligence agencies, Soviet brainwashing and more. The results of 2039 were utilized between 2040 and 2041, focused on the development of a range of non-lethal weapons for remote alteration of belief patterns in subjects. (Please remember, this is a fictional project.)

This review specifically concerns the 157 page HEXEN 2.0 book. Also included in the HEXEN 2.0 project are a Tarot deck (which is being reviewed separately), alchemical diagrams, photo-text works, a video, and a website (http://www.suzannetreister.net/HEXEN2/HEXEN_2_Temp.html). The book is large (9” by 11”, with the smallest font size known to mankind! The same was the case with the HEXEN2039 book.)

The book begins with an essay by Lars Bang Larsen (writer and art historian at the University of Copenhagen) on the nature of Treister’s work. From the essay:

“Unsurprisingly, considering that she trafficks in unwritten genealogies, the title of Suzanne Treister’s HEXEN 2.0 hides contraband. Diverting the project’s signification from references to witchcraft, the Greek word Hexis means coherence or cohesion; not just understood as a structural unity, but the source of all qualities in a body. Thus Hexis is defined by producing tensional motion in a body or across several bodies. On one ancient account, “there is a tensional motion in bodies which moves simultaneously inwards and outwards.”[i] It is easy to picture Treister’s work and its straddling of disciplines, discourses and cultural hierarchies as a dynamic mover that produces continual and contrary motions in or across bodies: physical bodies, concept-bodies, the body politic”

Larsen also discusses the Macy Conferences, a series of meetings from scholars in diverse disciplines (cyberneticians and social scientists) that were held in New York from 1946 through 1953. (These conferences act as the lens through which Treister leads us on an investigation of the scientific underpinnings of bio-political governance, the government that rules with information and through life. Larsen also places emphasis that the Tarot is used as a structuring device that mirrors and performs procedures of mass intelligence gathering in the service of a new epistemology. He also notes that in the HEXEN 2.0 Tarot deck the original symbolic import of the Tarot is used as ciphers that vie for their meaning with the new content that Treister invested them with.

From MKULTRA via the Counterculture to Technogainism

The book is broken down into four main sections: historical diagrams, the Tarot, the Macy Conferences attendees, and literature. Historical Diagrams are a series of five diagrams that Brodsky developed in 2009 during a residency that function as the key to the project. They are an attempt to map out specific histories, and to show how the histories interrelate. These diagrams include “From ARPANET to DARWARS via the Internet”, “From National Socialism via Cybernetics and the Macy Conferences To Neo-Totalitarianism”, “The Computer – From the Antikithera Mechanism to Quantum Telepathy”, “From Diogenes of Sinope to Anarcho-Primitivism and the Unabomber via Science Fiction”, and “From MKULTRA via the Counterculture to Technogainism”. 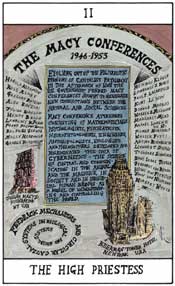 The section on the Tarot shows full page, full color reproductions of each of the 78 Tarot cards. Following are the 22 cards of the Major Arcana, and their associations in this deck: 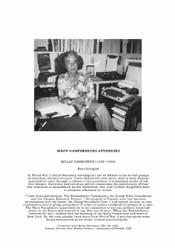 The Doors of Perception –
Aldus Huxley, 1954

The section on Literature shows a series of photographs representing individual works of literature – with all of the images reversed. A partial listing of this section includes: The Human Use of Human Beings (Norbert Wiener, 1950), The Electric-Kool-Aid Acid Test (Tom Wolf, 1968), Inventing the Future at MIT (Stewart Brand, 1987), The Call of Cthulhu (H. P. Lovecraft, 1926), Walden: or Life in the Woods (Henry David Thoreau, 1854), and Fahrenheit 451 (Ray Bradbury, 1953).

HEXEN 2.0 uses post WWII U.S. governmental and military imperatives to chart the coming together of diverse scientific and social sciences through cybernetics, the history of the Internet, the rise of Web 2.0, and increased intelligence gathering. It shows the implications for the implementation in the future of new systems that willo manipulate society, moving it towards was Treister terms a “control society”.

We have heard rumblings of programs of mass control – Treister combines this thought with investigation into the parallel histories of counterculture and grass roots movements. As Larsen noted in his essay, the lens of perception for this book is the Macy Conferences (1946-1953). The primary goal of these conferences was to set down a foundation for a general science of the workings of the human mind. I loved reading about these conferences – something that I had never heard of before! While this book is an imaginal work, it is based on actual events and real people , looking simultaneously at diverse literary, philosophical, and political responses to advances in technology.

So, we have mass intelligence, the history of the Internet, occult influences, the counterculture … and a Tarot deck! Oh, yes, there is also a black and white video of a cybermetic séance! We are talking alternatives here, mind boggling alternatives! Through the lens of the Macy Conferences, we are getting a whole new look at life! It is worth the price of admission for that reason alone!

Yes, you have to pay attention to follow this project … but then it gets scary … it starts to make sense!

Book cover scan is mine, all other scans are from the HEXEN 2.0 website.