Created by: The Witches at BeautyHistoryMagic.com
Images curated from vintage erotica collections
2011

The most beautiful women of the
early 20th century echo tarot’s
traditional images in a complete
deck offering divinatory depth,
power and delight.
An intimate window on history, an
esoteric tool of personal discovery.
(from the card accompanying the deck)

“Le Tarot des Femmes Erotiques” is a 78 card deck, created by the witches at BeautyHistoryMagic.com. It is a traditional deck in that it follows the 22 card Major Arcana, 56 card Minor Arcana template. Justice is VIII, Strength is XI. The suits are Wands, Cups, Swords, and Pentacles. The Court cards are Novice, Lady, Chatelaine, and Queen.

The Major Arcana has been renamed as follows:

The cards come in a beautiful, lavender colored hard cardboard box, with a life off top. The card name is on the top of the box, in gold lettering, with the image of the Two of Cups. There is no LWB (Little White Book) that accompanies the deck, but there is a PDF download of the card meaning on the site – http://www.vintageeroticatarot.com/.

The Magician
As Above, So Below. Her body is only slightly hidden by the fabric, but herface conceals all. Will she teach you? The appearance of this card indicates you’re in a time where much power is flowing through your life, where you can juggle the four elements like stones. Present in your life is much skill, craft, and cunning.

The Shaman
Accept the Mystery. Here is a woman who charms the snakes. Although nude, she is in complete control. How does she do this? This card is about ritual and conventionality. Ritual is neither required or sufficient, but a gratuitous grace. Conventionality in its ceremonial garb is not always restrictive, but a well-traveled path toward mystery.

Ace (of Cups)
The Gift of Loving. She sits on the floor, her body naked and in profile. A string of beads flows over her arm and around her neck. In another life, perhaps she was a mermaid. The chalice—is she offering it to us? Cups express the element of Water. The energies of Cups tell us about the love that is in our heart, sometimes romantic, sometimes for friends, sometimes a loving connectedness of our heart to the heart of the universe. When this card appears, everything is better, because everything is better with love.

Chatelaine (of Pentacles)
She Who Controls the Money. Dressed in a toga, belt, and sandals, she
commands the little gods of the world. Someone in your life will be your
mentor, and show you how success in the world is to be obtained. 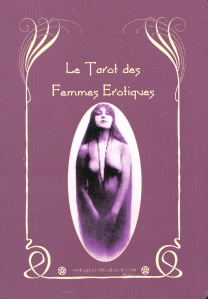 The cards are 3 1/3” by 5”. The card backs show the same deep lavender coloring of the box, with the deck name in gold lettering, above the image of the Magician. Gold accents run across the bottom and up the sides of the card back, which is not reversible.

The card faces show a yellowish/gold background, with a gold accent border set ¼” in from the side. The images were carefully curated from vintage erotica collections that are available on eBay, and are sepia colored. I found them to be thought provoking, and to embody the energy of the cards that they represent.

This deck intrigues me. A few of the cards that stood out were the Nine of Wands (A Pause in the Struggle), the Chatelaine of Wands (Friend of Women), the Ace of Cups (The Gift of Loving), the Two of Cups (Romance), the Lady of Cups (She Seeks Intuitive Wisdom), the Five of Swords (Defeat of the Mind), the Six of Swords (Retreat From Travail), the Nine of Pentacles (Solitary Creativity), the Novice of Pentacles (Opportunity), the Fool (Begin Life’s Adventure), the Magician (As Above, So Below), the Shaman (Accept the Mystery), and the Hermit (Withdraw, and Change Direction).

This is a beautifully done deck, and carries the themes through well. While it’s primary appeal may be as an art deck, it could also work as a reading deck.