Review – A Guide To Tarot and Relationships 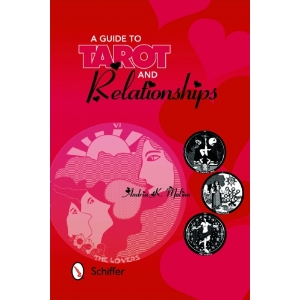 A Guide To Tarot and Relationships

“A Guide To Tarot and Relationships” is a very well thought out book, illustrated with imagery from Dolores Fitchie’s “Gorgon Tarot”. Together, they make a very positive statement about what Tarot can do when readings are focused. In this case … the focus is on relationship. The imagery in the Tarot allows the reader to focus on and identify key issues within the relationship, and what energy is there as a “help”. Through the cards, the reader is able to see developing patterns within relationship, and use them to explore and find answers.

Several spreads are presented at the beginning of the book, including a five card Soulmate Spread, a two card Ratio 1:1 Spread, and a one card Timing Spread, with sample interpretations.

There are tips presented for choosing deck. Reading the Tarot, and preparing for readings. Molina also presents basic information on the seven chakra’s, the numbers one to ten, and the elemental associations for the four suits.

The cards are divided into Major Arcane, the Seasonal Arcane (The Aces), the Pips (numbers Two through Ten), the Royalty Cards (the Kings and Queens), the Court of the Knights, and the Court of the Pages.

Each card is presented with a black and white image from the “Gorgon Tarot”, a key phrase, the associated planet, the planet’s ruler, the associated chakra, and the location of the chakra. This is followed by a discussion of the card, its Metaphorical meaning, its General meaning,

A Questions Statement, an Affirmation, and a suggested time frame for the card.

From the book, for The Fool:

This relationship is like traveling to a new country where you’ve not been before, and never experiencing the actions and the events that took place to get to the new location. Faith and excitement lead to a path of new experiences.

General Meaning For the Fool:

What’s one thing that brings you fear in your relationship?

Self-awareness allows me to pay attention to the details of my emotions and behavior.

This book gives the reader a place to start with relationship readings, and shows how the general information about the card can be focused on a specific area and situation. This book would be relevant for beginners as well as seasoned Tarot readers.

My one quibble with this book is the coloring on the back cover – older eyes cannot read that small red print set against black!