Unto whom the groves belong,

And by laws of ancient date

Found in scrolls of Faerie Fate

Stream and fount are dedicate

Far from haunts of men may stray,

We adjure you, stay no more

Exiles on an alien shore,

Bit with spells of magic birth,

One again make glad the earth.

What an incredible deck! Gorgeous, borderless art, combined with a lovely sojourn into the world of fairies. And … the backdrop is one my favorite era’s … the Victorian era! We get the flower lore of the Victorian’s, with the magic that is the fairy realm.  Beautiful, tasteful art, combined with careful research and clear, concise writing. Very representative of its time.

What impresses me about this deck is its sense of reality. Weatherstone notes that the Victorians believed that there were many doors into the Fairy world. One of them was into a world that was very much like our physical world, and this is the one that is represented in this deck.

The companion book gives some basic facts about fairies, as well as the structure of the Tarot. There is a table that lists the traditional titles for the Major Arcana, along with the titles used in this deck. Weatherstone discusses how to use the cards, including reversals (although this deck was intended to be read upright). Each Major Arcana card is presented with a black and white image, the card number and title, and a short quote. There is a discussion of the card, and how the card would fit into a reading. “In a nutshell” gives basic upright keywords for the card.

Note: throughout the cards Victorian flowers are mentioned. At the end of the companion book there is an appendix that lists flowers, and what they stood for in the Victorian world.

Spreads that are presented include: “A Fleeting Glimpse of Fairy” (One Card Reading), “The Herald’s Welcome” (A Seasonal Spread), “Titania’s Dream”  (a seven card spread), and “The Dance of Happiness” (an eight card spread). 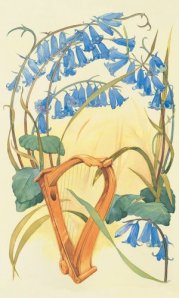 The cards are 2 3/4″ by 4 1/2″, of sturdy card stock. The backs show bluebells against a white background, and are not reversible. Bluebells are mentioned in both the Fool and the Worlds cards as being a sign that you are entering the fairy world!

The artwork in this deck is incredible – consistent throughout, highly detailed, and beautifully presented. It doesn’t hurt that there are no borders, which for me is a huge bonus! (So much easier to enter!)  The Seeress is seated at her crystal ball, opening herself to receiving visions. The King of Spring shows an individual with a sense of humor, rejoicing at the world around him. The Queen of Winter is gorgeous – dressed in white, seated on her throne. She understand silence, and when to keep her thoughts to herself!

The Moon shows a fairy lady dreaming under the full moon. Here we see moonflowers and mystery!  The Seven of Autumn shows s fairy winemaker, checking his product from the previous year. The Two of Spring shows a fairy lady, sitting in a tree sketching the first birch tree catkins of the spring. The Ace of Spring shows a beautiful cherry plum branch, with what appears to be a kite caught up in it.

The Hermit (one of my birth cards) shows a fairy Hermit in studious retreat in his library. His owl companion keeps watch on a branch outside, The  fairy Vicar, seated amongst the roots of an oak tree, offers spiritual teachings to his congregation. The fairy  Emperor is standing, posing for a formal portrait in his throne room. With him are two of his many children.

The fairy world is a lovely world, where we can gain insight into the challenges of life, while receiving gifts of spiritual wisdom. I would not hesitate to offer this as a choice of decks for a reading to a client of any age or background. It speaks to all, and offends none.

Reproduction prohibited in all venues without the written consent of the author.

Posted by Bonnie Cehovet on September 24, 2013 in Tarot