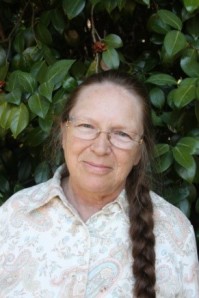 In November of this year the inaugural Northwest Astrology and Tarot Salon will be held at the Breitenbush Conference Center, near Detroit, OR. (More information about the Salon can be found here – nwsalon.com.) I would like to introduce you to Karen Campbell, one of the Conversation Leaders for this event.

As a teenager, Karen began using Tarot in 1961. She describes it as a “teen age rebellion” type of thing. She got serious in the early 80’s and took classes from Christine Payne Towler and then began reading for others. She was a reader at Womyn Spirit Continuum, has participated in the “Pathways to Transformation” in Yachats for the past 17 years and last year had a tent at the Shrewsbury Faire. Since retiring from her work as a prison guard at the Oregon State Penitentiary in 2010, she has increased her involvement in fairs and events.

Karen is a SoulCollage® facilitator, a Reiki and Alchemical Healing® practitioner, and offers workshops in Journal reading and writing. She is ordained with the Church of Universal Love and performs special ceremonies. She describes her work with Tarot cards as Spirit Guided Counseling.

The subject that Karen will be bringing for discussion is the use of Tarot and Journal writing to further your personal and professional goals. She will use her own goal of having peaceful personal relationships as a kick starter to the exploration. Journaling with the Tarot can take many creative and purposeful paths. It is hoped that you will bring innovative techniques to share and Karen will too.

Reproduction prohibited without the written consent of the author.

Posted by Bonnie Cehovet on May 23, 2014 in Uncategorized 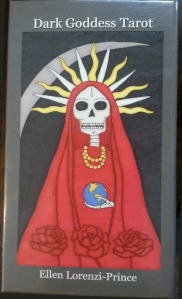 The “Dark Goddess Tarot” is based, quite literally, on dark goddesses … goddesses who, as Ellen notes in her introduction, represent aspects of life that people may be uncomfortable with, such as the powers of age and death, sex and sovereignty, ferocity and judgment, suffering and shadow, magic, mystery, and transformation. To be worked with to the depths that they were created for, there needed to be a companion book … a guide into this vast expanse of feminine wisdom. And so it shall be … and so it is. A 172 page book of wonders, written by Ellen Lorenzi-Prince as only she can write … an intuitive guide into some of the strongest powers that you will ever encounter!

A bit of background about the deck: It follows a traditional structure, elemental: Fire, Water, Air, and Earth. In choosing goddesses for each suit, attention was paid to elemental affinity, as well as the meaning of the card. The court cards are renamed to represent fearsome female powers:  Amazon (fierce and independent), Siren (sexuality), Witch (practitioner of magic), and Hag (one who walks with death). I love that the deck is NOT meant to be used with reversals! There are specific instructions for working with the energies of each card … to show respect, to honor the energy, and to protect one’s self. Probably the best advice … to suspend ones disbelief. In the companion book, each card is dedicated to someone in Ellen’s life that for her has a connection to that energy.

Each Major Arcana card is presented with a black and white photo, who the card is dedicated to, the card name and number, the associated goddess, what the goddess represents, and what happens when she appears in a reading. For instance … the Fool is dedicated to Mary Greer. The mythological figure represented is the Sheela Na Gig, the British Spirit of Warning and Invitation. When this card appears in a reading, the Seeker is advised to open their eyes, to not see only what they already know, to release expectation and judgment, and to allow wisdom to come in unexpected ways.

The introduction to the Minor Arcana give a short summation of the elemental nature of the suits, and a listing of the goddesses for each suit. Each card is presented with a black and white photo, who the card is dedicated to, the suit and card number (title and card number for the court cards), the associated goddess, what the goddess represents, and what happens when she appears in a reading.

In her introduction Ellen notes that the Dark Goddess Tarot was inspired by an intended for troubled times. In my life, I would read that as “Troubled Times”! We are not denying the pain we are going through, and we are not celebrating it … we are taking an honest look at our issues, honoring them, and then doing something about them!

This is not a deck for the faint hearted … this companion book will take the Seeker deeply into their psyche, which can be very scary territory. Proceed at your own risk … but please do proceed if you want to grow, and be all that you can be!

Reproduction prohibited without the written permission of the author.

I just received the Tarocchi Della Luna Nuova (the New Moon Tarot) from Giordano Berti. The current offering is a repackaging of the original deck, accompanied by a 16 page pamphlet on the artist, Maria Teresa Monti, with full color illustrations.(The pamphlet is in Italian, by Giordano Berti.) This is a limited edition deck (300 copies) published by the Museo dei Tarocchi in 2008. It was published posthumously in honor of the artist by her close friend, museum curator Morena Poltronieri. It came to my attention through my friend artist/Tarotist Arnell Ando.

The titles are in Italian, and there is no companion book. There is a four page insert with the current deck, two pages in English, two pages in Italian. the first page discusses the deck, the second page presents the artist. In this short page, we get to know the artist, how she lived, including the fact that she added a personal interest in magic to her artist world. Note: In honor of transparency, I need to tell you that an excerpt from my original review of this deck is included in the insert. The original packaging was envelope style.

For this presentation,  Giordano Bert commissioned a sturdy, lift top box by Italian art designer Letizia Rivetti. It was handcrafted in Italy by “RINASCIMENTO: Art Style”. There are only 88 numbered copies of this box. It is done in lovely shades of brown and gold, with Imperatrice (the Empress) on the cover. The figure is surrounded by a gold border, which is surrounded by an inset border. This is an absolutely stunning box, which meets its goal of matching the quality of the artwork in the cards. Both the deck and the box carry authentication as being limited edition items.

I am thrilled with both the box and the deck … quality craftsmanship that lends itself to working with the Tarot in a very deep manner.

For further information on how to purchase this incredible deck, please contact Giordano Berti at giordano.berti@gmail.com ..

Reproduction prohibited without the written consent of the author. 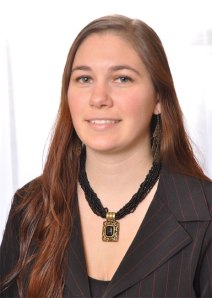 In November of this year the inaugural Northwest Astrology and Tarot Salon will be held at the Breitenbush Conference Center, near Detroit, OR. (More information about the Salon can be found here – nwsalon.com.) I would like to introduce you to Jadzia DeForest, one of the Conversation Leaders for this event.

Jadzia DeForest is a Tarot reader, instructor, and author residing is Portland, Oregon. Her approach to Tarot is practical and positive; working with divination as a tool for self discovery. Jadzia is co-author to both the Tarot Learning Cards and Astrology Learning Cards decks, published through her and her husband’s company Devera Publishing & Distribution. She is also the director of a group of dedicated Cartomancy enthusiasts who are putting on the Northwest Tarot Symposium (NWTS) in Portland in March of 2015.

At the Northwest Astrology and Tarot Salon, Jadzia will be leading a conversation on Tarot in our modern world. How do you see the traditional meanings in the Tarot carry forward to our high-tech, fast-paced society? With her, you’ll explore this question and more. The conversation will revolve around modern imagery decks, how as a reader you may apply updated card meanings, and what does the modern Tarot look like in a world that doesn’t have Pages or Knights.

You can find Jadzia online at several locations. Learn about her publications at www.DeveraPublishing.com. For readings, classes, and workshops she’s at www.TarotByJadzia.com. Northwest Tarot Symposium information is at www.NWTarotSymposium.com and on Facebook.