This deck is one of three that were on my wish list when I attended NWTS (Northwest Tarot Symposium) in 2015. One of the more simplistic reasons that I wanted this deck is because it is round, reminding me of Vicki Noble’s “Motherpeace Tarot” (which was a whole new experience for me when it came out!). When I stopped by the “New Earth Tarot” vending table I was able to speak with Charlene, who indicated that the “Motherpeace Tarot” had been her reading deck for many years, and definitely influenced her work on her own deck.

Note: The 78 card deck and 247 page companion book can be purchased separately, as indicated by their ISBN numbers. They can also be purchased together on the authors site.I am reviewing them together because they are a working “set”. Th deck comes with a LWB (Little White Book). The deck follows traditional lines, with the following cards being retitled: Triumph (The Chariot), Wise One (Hermit), Way SHower (The Devil), All and Everything (The World). Justice is VIII, Strength is XI.The suits are Wand, Cups, Swords, and Mirrors, with the Court Cards titled Child, Adolescent, Woman, and Man.

“The New Earth Tarot” is meant to be used not only as a divinatory tool, but also as a therapeutic tool, and a gateway for creating a self-directed life. With this deck, one can honor tradition (I am a traditionalist!), while opening up to the possibilities of the future. It is a culturally diverse deck, with images from both ancient and modern times. By nature of being round, the issue of using reversals versus not using them is negated. Instead, we are looking at degrees of interpretation. The imagery becomes a rich, vibrant mandala addressing life.

Charlene talks about the background for the “New Earth Tarot”, referencing that humankind is awakening to taking responsibility for their lives. She also talks about how time is speeding up, and changes are happening more quickly. She feels that a new perspective, and new skills, are needed to make changes in the present that are based on what will be (future). For that we need new insight and new tools. She states that working with the New Earth Tarot offers us the opportunity to glean wisdom from the past, present, and possible futures.

This deck is intended to function as a map for personal and spiritual growth, a manual for creation and manifestation, a therapeutic method, a tool of divination, and an archive of spiritual and metaphysical knowledge. Charlene states that the number on a Tarot card represents the highest and most significant piece of information on the card, as it represents the card’s Divine expression and creative energy.

The companion book covers the energy of the numbers 1-9, 0 – 10, and 11 – 21. There is a short section on the archetypes as universal patterns, the process of the Major Arcana, and the archetypal corespondences.

The cards are presented with a small full color scan, a write-up on what the card means, indications (upright meanings), and inverted (other than upright meaning – not to be confused with being the opposite of the upright meaning).

There is a short but interesting section at the end of the book correlating astrological signs to Minor Arcana suits, and which signs match which element. This is followed by a short section on how to read the cards.

At the end of the book is a bibliography that is well worth looking into!

The card faces show a white border, with a narrow gold inner border, surrounding the imagery. The Major Arcana show the card number, in text, across the top, with the card name across the bottom. The Minor Arcana pips (numbered cards) show the suit number at the top of the card, and the suit name across the bottom. The Court Cards have the title across the top of the card,in black, with the suit along the bottom of the card, in black. The imagery ranges from simple (the Page of Swords shows a young child, in a red robe, seated, holding a golden sword), to esoteric (All and Everything (Te World) shows a female figure, standing on the world, with a golden crown and a globe in her left hand. Behind her we see clouds, and a white dove flying. Above her head we see an eye, with golden rays emanating from it. 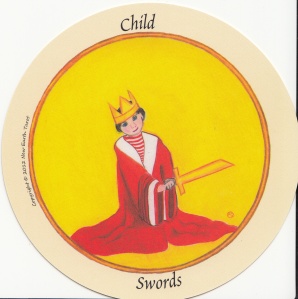 Child of Swords: Patience and practice are called for, as this is the would-be king. Inverted, we are seeing an individual that is attempting to lead without expertise or preparation.

The Lovers: Connection is the foundation of relationship. From connection comes a sense of belonging and contentment.

All and Everything (The World): As the Spiritual Fool you are ready to step into the unknown realm of All Possibility. 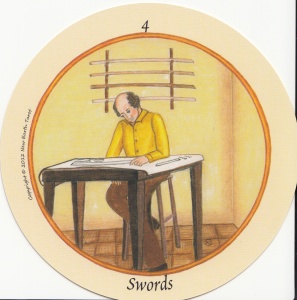 4 of Swords: Follow the opportunity that has come to you – use your intellect to bring organization and intention to a creative endeavor. The best of intentions are uprooted by disorganization and poor planning.

Judgement: Judgment is internal, not external. Self-forgiveness leads to self-acceptance. You are being gifted with a new chance at life. Inverted, judgment acts as a self-imposed punishment. 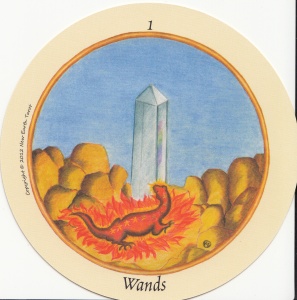 1 of Wands: This is the essence of all that is the element of fire. Use your inner fire to motivate. With complacency, we lose personal power and individuality. 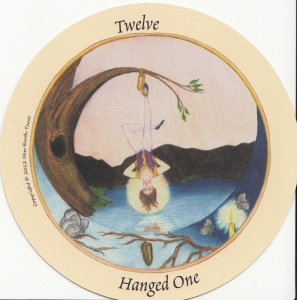 Hanged One (Hanged Man): Change takes place in the unconscious, but we can initiate it consciously. Hanging on to old habits gets in the way of needed change. 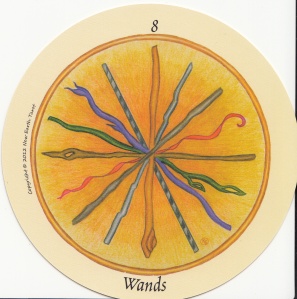 8 of Wands: You find balance by viewing the past and the present in light of the future. Self-punishment and self-indulgence turns the wheel of karma.

Wheel of Fortune: There are no accidents – life is a result of our choices. If we do not accept responsibility, we resign ourselves to our fate.

I love the vibrant nature of this deck, and the thought that went into it. I do feel that this deck can act as a gateway into a future that we need to gain perspective on.

© 2015 Bonnie Cehovet
Reproduction prohibited without the written permission of the author.