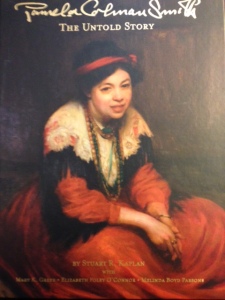 Where to start! “Pamela Colman Smith – The Untold Story” is a gorgeous, 440 page hard-bound book that is filled with wisdom, full color photos, and amazing inserts. It gifts us with a whole new perspective on this iconic lady! It is a large book (10.3” by 2.2” by 13.5”), written by four distinguished scholars (Stuart R. Kaplan, Mary K. Greer, Elizabeth Foley O’Connor, and Melinda Boyd Parsons). It includes: (1) over 400 color pictures of Pamela Coleman Smith’s non-Tarot work, (2) excerpts from her personal documents, correspondence, portraits and photographs, (3) rare archival material from leading museums and libraries (4) an extensive bibliography, (5) essays on the events and people in her life (such as Bram Stoker and Ellen Terry), and (6) a chronological survey of her folktales, art and poetry. 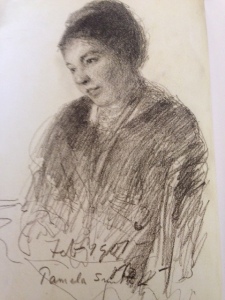 Before I begin my review, I would like to share a bit of information about the authors, so that the quality behind this book is understood. Stuart R. Kaplan is the founder of U.S. Games, and the gentleman who really brought the Tarot from Europe into the mainstream of the U.S. He is the author of “Tarot Cards for Fun and Fortune Telling”, and co-author, with Jean Huets, of volumes I-IV of “The Encyclopedia of Tarot”.

Mary K. Greer is a Tarot scholar, writer (her books include “Tarot For Yourself” and “Tarot Reversals”), speaker, professional Tarot consultant, and featured speaker at Tarot conferences in the U.S. and abroad. 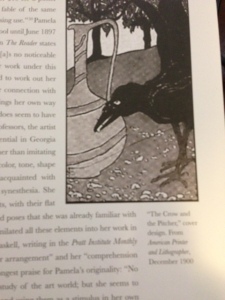 In the Tarot world, we think of “Pixie” as the artist behind the Rider-Waite Tarot – but she was so much more! This book covers her personal history (early childhood and life in Jamaica), her work in miniature theater, her life as an art student, and her various personal projects. 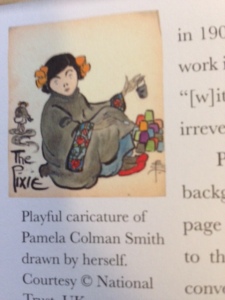 There is an amazing section with work that most of us would not have seen before on her writing, poetry, and artwork. We are gifted with full color photos and text of her art and stories that could clearly make a stand alone book on their own! 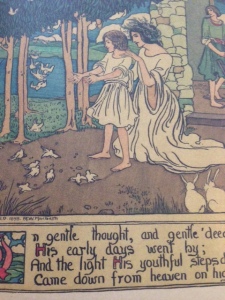 We see Pixie in terms of her Tarot work, her work in film and media, her part in the mid-20th century Tarot Renaissance, how she fit in with A.E. Waite and the Golden Dawn Society, along with critical commentaries on her work. 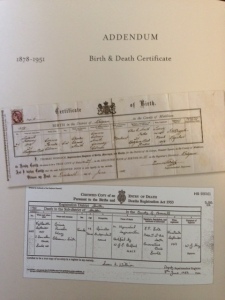 There is an addendum at the end of the book that shows her birth and death certificate, an article that she wrote entitled “Should The Art Student Think?”, a black and white image of a brochure from 1911 from William Rider and Son’s advertising Tarot cards, Pixie’s passport application, a full page photo, and more. This is followed by an extensive bibliography. 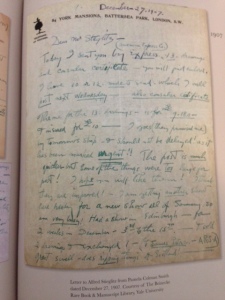 Pixie was a woman for all seasons. Born in England, she lived for many years in Jamaica, where she recorded Jamaican folk tales and music. She was an artist and illustrator who attended the Pratt Institute (she is primarily known in the Tarot world for her work on the Rider-Waite Tarot cards), was involved in the theater in both an acting and a costume design capacity, and had forays into printing and publishing (she was a pioneer in publishing, founding the literary magazine The Green Sheaf). Her acquaintances included actress Ellen Terry, author Bram Stoker, poet and mystic A.E. Waite, photographer and promoter Alfred Stieglitz, actor Henry Irving, and poet W.B. Yeats. 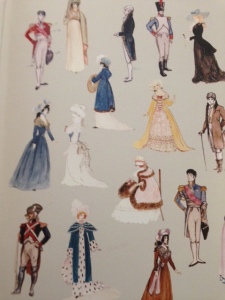 “Pamela Colman Smith” is both an iconic work, and a very scholarly work. A great deal of time, energy, and thought has gone into it. Each of the four authors speak in their own voice, in their own section. Beginning with the cover, which shows a well-known photo of Pixie, with the title in gold inlay lettering, we are presented with quality and class. The front and back covers, with their facing pages, show male and female figures in colorful dress. 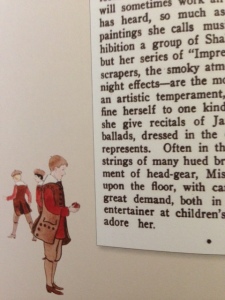 Throughout the book, at the sides and bottom of many pages, we see small artwork done in all black, monochromatic, and full color. It is eye catching, and amazingly well done. I had to ask what the term for this is – they are called “spot illustrations”.  In this book you will find material that has not been shared before, and that will give you a broader view of Pamela Colman Smith, her work, and how she fit into her times. This is a reference book all on its own! Many thanks to the authors for gifting us with such an in-depth, high quality work.

Many thanks to Stuart R. Kaplan for allowing me to share scans of the visual material from this book.