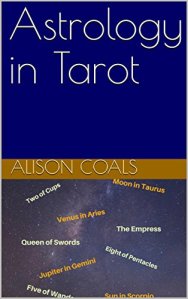 “Astrology In Tarot” is a 108 page e-book by Astrologer and Tarotist Alison Coals. Not all Tarot readers use astrological associations, as Coals points out in her introduction. But when a reader does decide to use them, they do bring another layer of understanding into a reading. The system that Coals uses is a modification of the system developed by the Hermetic Order of the Golden Dawn.

Coals notes that not all decks lend themselves to an astrological overlay. It is up to the reader to decide if they want to use astrological associations in a reading, and which deck they wish to work with.

Each individual Tarot card is presented with their astrological associations: for example, the Hanged Man is associated with the element of Water, and linked to the planet Neptune, followed by a short discussion of how the attributes of each association play out in the card.

The Minors start with the Two’s through Ten’s. Each card is presented with the card number and suit name, the associated planet, along with the sign that the planet is in, and an approximate date that the card rules. For example, the Three of Cups is Mercury in Cancer, and rules from the 2nd – 11th of July. This is followed by a discussion of how all of this plays out in the card.

The Aces and Pages are not assigned planets or signs in the Golden Dawn system. Aces are seen as pure elemental quality: Ace of Wands – primal Fire, Ace of Cups – primal Water, Ace of Swords – primal Air, Ace of Pentacles – primal Earth. Pages are associated with the Aces. There is a very nice chart in this section listing the associations between the four quadrants, the four seasons, and the Aces/Pages. An example here would be Aries/Taurus/Gemini, Spring, Ace/Page of Pentacles. Basically what we are seeing here is the seasonal attributes over-laid on the basic energy of the Aces and Pages.

The tone of writing is very light and airy – too light for me, but Coals does get her points across. I would have preferred her to stick with the Golden Dawn system, rather than tossing in different systems as she went along. You probably need to know that I know a minimum of astrology, and while I understood and could follow what Coals was saying, I don’t see the need for adding the astrological layer to a reading. Were I to do so, I would be more inclined to use the Kabbalah and astrology as mutual layers. Astrologers will find this book easy to follow, and of benefit. Those with little to no astrology background will be able to follow the book, but could get easily sidetracked.

© July 2017 Bonnie Cehovet
Reproduction prohibited without the written permission of the author.