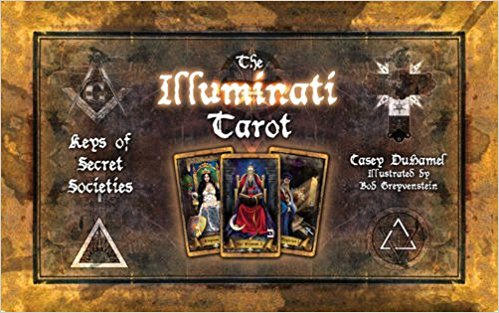 The “Illuminati Tarot – Keys of Secret Societies” is a traditional 78 card deck, accompanied by a 176 page companion book. The box that the deck and companion book come in features a lift top, with the traditional Schiffer magnetic closure. The bios of the author and artist are featured on the inside of the lid. That in itself is very awesome!

The backbone of this deck is that it is an exploration of what are called “secret societies” – groups of people reflecting a unified philosophy that operate in the shadows of society (my definition). DuHamel’s background as a former member of the Hermetic Order of the Golden Dawn, an initiate of the AMORC (Ancient and Mystical Order Rosae Crucis – also known as the Rosicrucian Order) and as an ordained minister help to give her the perspective needed to see how these organizations may have influenced the origins of the Tarot, and to see the historical implications. This is backed up well by the illustrations done by Greyvenstein, an illustrator and graphic designer born in South Africa.

The 176 page companion book refers to the 78 cards of the Tarot as the “Royal Road”. While the companion book itself is an excellent resource, DuHamel has shared other resources, including individuals that study and write on the background of Tarot, throughout the pages. Arabic origins are presented, as well as some thoughts on the origins of Tarot that are generally considered to be myths (such as Egyptian mystery schools, and the nomadic gypsy culture). Heresy – the posit is made that perhaps the Visconti-Sforza Tarot is not the oldest Tarot, that the oldest Tarot may be a French deck entitled Charles VI (also known as the Gringonneur or Estensi Tarot). (Just joking about this being heretic!)

The backbone of this deck is that the Tarot shares links with secret societies both past and present. DuHamel references Tarot being used as a hermetic vehicle through such connections as Freemason Antoine Court de Gebelin (1719-1784), Rosicrucian and former Freemason Alphonse Louis Constant (1810-1875), and esoteric scholar Arthur Edward Waite (1857-1942).

The presentation for the Major Arcana include a small (approximately quarter page) full color scan, the card name and number (in Roman numerals), a short quote, esoteric background, meaning (associations for Archangel, Cabala, Element, and Hebrew letter), a discussion of the card, and Keywords.

The presentation for the pips includes the card number and suit, in text, a small (approximately quarter page) full color scan, and Keywords.

At the end of the book is an inclusive bibliography that allows the reader to do further research on their own.

The traditional structure for naming the Major Arcana has been kept intact, with Justice at VIII and Strength at XI. The suits are Cups, Coins, Wands, and Swords. The Court Cards have been renamed: Novice/Page, Initiate/Knight, Adept/Queen, and Mage/King.

The gold/brown coloring gives an “antique” feel to the deck. Each card has the Hebrew letter associated with it somewhere on the card. I loved the artwork – it is the type of deck where one continues to look for symbolism beyond the obvious, beyond the “first layer”. 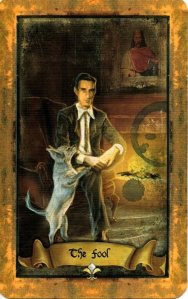 The Fool shows a modern day man, dressed in a business suit, with his dog at his knee. Meanings include Lumiel (Archangel), Path 32, Malkuth-Yesod (Cabala), Fire (Element), and Shin (Hebrew letter).

The Wheel of Fortune shows a scribe (representing Nostradamus), seated in the outdoors, with an astrological chart in the sky behind him. Meanings include Raphael (Archangel), Virgo (Astrology), Path 20, Chesed-Tipharet (Cabala), Earth (Element), and Yod (Hebrew Letter). 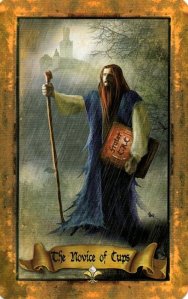 The Novice of Cups shows a male figure (representing Christian Rosenkreuz), dressed in a flowing blue robe, over a white shirt with long sleeves. Under his left arm he is carrying an esoteric journal, while his right hand grasps a staff. The background is murky, with what appears to be a castle on a hill in the distance. Associations include Dreaming the Dream (Nature), Earth of Water (Element), Heh (Tetragramaton), and young child (Card Personage).

The Two of Cups shows two cups (one silver, one gold), standing in the middle of a wreath of roses. Keywords include attraction, romance, cooperation and harmony.

The Adept of Wands shows a female figure (representing Isis), standing. She is wearing a white dress, with an Egyptian headdress. In her right hand she holds a white lotus, in her left hand a gold ankh. At her feet rests a ram. Associations include Inner Grace, Outer Beauty (Nature), Water of Fire (Element), Heh (Tetragrammaton), and mature woman (Card Personage).

The VII of Wands shows a hand coming up from the bottom of the card, with two hands in the middle of the card, one hand coming in from each side of the card. Three Wands cross in each direction, with the seventh Wand upright between them. Keywords include valor, courage, and overcoming obstacles.

I am very pleased with this deck and the companion book. I may not agree with everything that is presented, but I feel that it is good to have an open mind. I also hold the opinion that esoteric societies have had a great deal to do with the development of the Tarot. This deck, and its companion book, are best approached by someone who has at the least a basic knowledge of Tarot and Tarot history.

Note: There has been some confusion between the Illuminati Tarot: Keys of Secret Societies and Erik C. Dunne’s Tarot Illuminati. These are totally different decks that are both awesome in their own right.

© May 2017 Bonnie Cehovet
Reproduction prohibited without written permission from the author.