In November of this year the inaugural Northwest Astrology and Tarot Salon will be held at the Breitenbush Conference Center, near Detroit, OR. (More information about the Salon can be found here – nwsalon.com. ) Founder and Hostess for this event is Toni Gilbert. I have known Toni as an Internet friend for several years. She is an artist, author, editor, transpersonal counselor with a background in holistic nursing. Her written works include many published articles, along with two books –  “Messages From The Archetypes”, 2004, White Cloud Press, and “Gaining Archetypal Vision”, 2011, Schiffer Publishing. Toni was founding director of the Oregon Holistic Nurses Association, and editor for the Alternative Journal of Nursing. 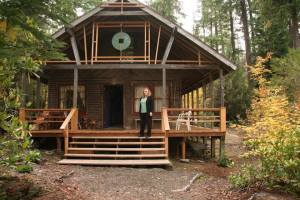 Toni has owned a “summer cabin” (yes, the cabin in the photo above!) at Breitenbush (but on National Forest land) for the past twelve years. She discovered Breitenbush in the 70’s”, but became involved with the people and projects there in 1998. In “The Healing Art of Tarot”, Toni writes about the work she did at one of Breitenbush’s annual retreats (http://www.tonigilbert.com/articles/Healing-Art-of-Tarot.pdf). Some of the Salon Conversations will be taking place in Toni’s cabin! 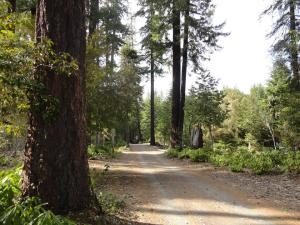 The subject that Toni will be leading conversations on will be “Gaining Archetypal Vision”. Toni has seen patterns in our world since her twenties beginning with the poetry-music of Bob Dylan, she wondered why he spoke to her so profoundly. Later in her studies, she discovered that Carl Jung also shared this way of perceiving.

With many years of esoteric studies Toni began to explore Tarot cards at age 50. She immediately realized that the cards mirrored her own thoughts, knowing that they were drawing on her own unconscious mind’s contents. With the help of a cosmic synchronicity, she sees the cards as a nighttime dream laid out to be interpreted. She did five years of intense intellectual and experimental study before using them in her alternative nursing practice. She could see that they were the perfect healing art to use with wellness counseling and that nursing would benefit. It was such a good tool that she felt the need to write her first book (“Messages from the Archetypes”), and began to use them in a holistic nursing venue that she termed an alternative nursing practice. Toni has retired her nursing license, but continues to offer her wisdom as a transpersonal counselor using the tools mentioned on her personal web site (www.tonigilbert.com), including guided imagery, energy work, meditation, Tarot Counseling, dream interpretation, essential oils, expressive arts, and mind/body consciousness.

I am so looking forward to in depth conversations on the archetypes, with the unending little turns in the road that this can take us to. Breitenbush is a lovely area, deep in the forest that lends … itself to introspection, and a grounded connection with life. As Hostess, Toni is gifting the Tarot world with an incredible “time warp” of past/present/future. I fully expect to be leaving Breitenbush with a fresh perspective not only of astrology and Tarot, and how they can work together, but of the personal work that I am doing.

A final thought – this is the link to “Astrology, Tarot, and Maslow: Using the Esoteric Arts For Self-Development”, written by Toni, based on work done by Christine Payne-Towler – http://www.tonigilbert.com/articles/AHP-Perspective-JUNE-2011a.pdf,

I have the great honor of doing Event Press for the Northwest Astrology and Tarot Salon. This project, envisioned by hostess Toni Gilbert, puts me in mind of Tarot, Art, and Music salons of the not too distant past, where people gathered in the homes of the wealthy to discuss the latest in whatever they were interested in. A very up-scale “Meet & Greet”! It will be held from November 10th till November 13th, 2014;

The intent, according to Toni, is to gather people together to “partly amuse each other, and partly increase the knowledge of the participants through conversation”. I am quite looking forward to this whole party! here will be conversation on Astrology and Tarot, study and practice with the Tarot cards and with astrological charts. All levels of students are encouraged to attend … from beginner to master!

The salon is being held at Breitenbush Hot Springs Retreat & Conference Center, outside of Portland, OR. Groups will meet in Toni’s cabin, as well  as at one of the beautiful spaces at Breitenbush. Conversation Leaders include Toni Gilbert, James Wanless, Isha Lerner, CHristine Payne-Towler, Robert Volkman, Paul Nagy, and Arwen Lynch.

To find out more information, go to Toni’s site, and click on Workshops. If you would like to attend, print out the application, fill it in, and send it to Toni (the address is on the form). This is an “insurance form”, in that it will reserve a place for you when open registration starts in June. No payment is required until June. Each participant will also need to make room and board reservations through Breitenbush.com six months in advance.

We hope that you will all join us on the lovely adventure!

Reproduction prohibited without written permission of the author.