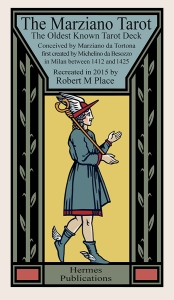 The Marziano Tarot is a recreation of the oldest known Tarot deck, conceived by Marziano da Tortona and first created by Michelino da Besozzo in Milan between 1412 and 1425. The deck consists of four suits comprised of Aces through 10’s, two Court Cards (King and Queen), and four trumps (representing classical gods). The deck is accompanied by an 18 page LWB.

The LWB starts out with a short history of Tarot, and how it was originally used as a trick taking game. Place puts the development of Tarot in Italy over the 15th century as the precursor for the French Marseilles style Tarot.

In the Marziano Tarot, each of the suits is represented by a bird:

Phoenixes, representing the desire for riches, were assigned the gods Juno, Neptune, Mars, and Acolus.

Turtledoves, representing the goal of chastity, were assigned the goddesses Pallas, Diana, Vesta, and Daphne.

Doves, representing the desire for sensuality, were assigned the gods/goddesses Venus, Bacchus, Ceres, and Cupid.

It was quite interesting to me that Place states that there are no existing cards from this deck. He redesigned this deck as if it had become a standard deck that was later reproduced in woodcuts and hand colored. The images on the cards are based on Marziano’s descriptions as translated by Ross Gregory Caldwell, and on the woodcuts found in the 15th century Hypnerotomahia Poliphili, early printed cards, as well as other Renaissance sources.

The cards are presented in text only, with suggested divinatory meanings. The statements in quotations assigned to each god are taken from Marziano’s descriptions, as translated by Ross Gregory Caldwell.

The final page of the booklet describes how Place sees the cards being read. In their simplest form, he sees the cards as a series of pictures that invite the reader to make up a story. He sees this as an exploration of the unconscious, searching for gems of insight. 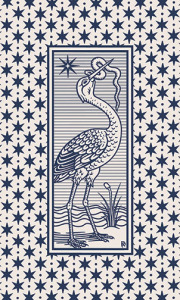 The cards are 2 ¾” by 4 ¾”, of sturdy card stock. The backs have a white background, covered in black stars. The central figure is a large bird that appears to have a snake in its mouth. It is not reversible.

The card faces on the pips and court cards show a white border, followed by a black border, surrounding a central image. The trumps show the same borders, with the name of the god/goddess centered  at the top of the card, with the card number in Roman numerals under the title, on the left hand side of the card. The card titles are in Italian. 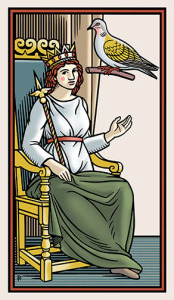 A virtuous woman who is true to her word. 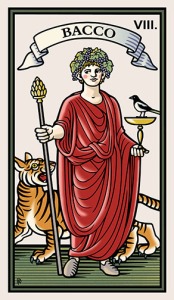 Bacco (Bacchus) – The embodiment of the grapevine, he represents drunkenness, but also ecstasy, and initiation into the mysteries. 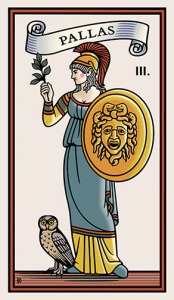 Pallas – The embodiment of wisdom, she represents intelligence, debate, and philosophy. 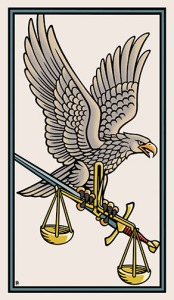 Ace of Eagles – Actions that initiate justice and virtue, a good cause, doing things for the right reason. 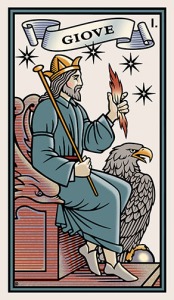 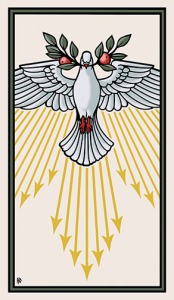 This is not a traditional deck, therefore it is not a deck for teaching. It is a unique recreation, and a definite collector’s item. Once the learning curve with only two Court Cards, and the 16 trumps represented by gods/goddesses is accomplished, the deck reads well.

Posted by Bonnie Cehovet on September 18, 2016 in Tarot

Review – Alchemy and the Tarot 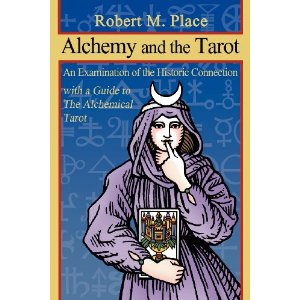 This is a long awaited book for many of us in the Tarot field. Acting as an updated companion to all editions of the Alchemical Tarot, it also addresses the historic connection between Alchemy and the Tarot. As in all of his work, Place’s personal story is woven into the process. (I believe that for all of us, our personal story is the foundation for the work we do, and that it is what drives us, not the work itself.) Part of Place’s story is that he is an internationally recognized artist, author, and scholar of the western mystical tradition. His work includes the “Alchemical Tarot”, the “Tarot of the Sevenfold Mystery”, the “Angels Tarot”, the “Tarot of the Saints”, the “Buddha Tarot”, and the “Vampire Tarot”, as well as “The Tarot: History, Symbolism, and Divination”, “Astrology and Divination”, “Shamanism”, and “Magic and Alchemy”.

It is interesting to check out Place’s site (http://www.thealchemicalegg.com/) – the name is not a fluke. Here is what he says:

“The “Ovum Philosophicum,” which can be translated as the Philosophical or Alchemical Egg, is the principal vessel used in alchemical operations. During the alchemical process, the material, Hermetically sealed in the Egg, is put through a symbolic death and rebirth. When the Egg was cracked, a new mystical substance emerged which was an elixir that prolonged life and acted as a catalyst capable of improving any substance that it came in contact with. This substance, called the Philosopher’s Stone, could change lead into gold and change an ordinary person into an enlightened master.”
A significant “Aha!” experience happened to Place in the summer os 1987 – as he was studying an illustration of the Philosopher’s Stone in an alchemical book that he was reading. He came to the realization that the symbolism of the design for the Philosopher’s Stone was entirely interchangeable with that of the World card in the Tarot. He came to realize that the Tarot Trumps represent the alchemical Great Work.”

In this book Place does indeed discuss the alchemical symbolism of each of the cards in the Alchemical Tarot. He prefaces this with investigation into the history of alchemy, and the history of the Tarot. We will need to look at both histories to see why there is a connection between the two, and how we can gain deeper insight into the Tarot’s mystical secrets.

In his introduction, Place describes a dream that he had, a dream with great portent. He was told that he was receiving an inheritance from an ancestor, and that it was a powerful tool that needed to be used wisely. That inheritance turned out to be a Tarot deck – the Tarot of Marseille, to be precise. This lead to his purchasing the Waite-Smith Tarot, a deck that one of his friends had shown to him. Place saw these decks in an interesting way – as tools for creating a message in pictures that could be interpreted as a dream – a waking dream. He quickly realized that he needed to gather all of the information that he could related to the themes he saw in the illustrations.

He approached Gnosticism, alchemy, Neoplatonism, and related subjects. In time, he heard a radio commentator discussing the Harmonic Conversion, and how during this period of spiritual transformation sensitive individuals all over the world would be experiencing a flood of information on spiritual subjects. He recognized himself, and what he was experiencing!

Place notes that the work he was doing was guided by spontaneous magical coincidences. It lead him to his writing partner (Rosemary Ellen Guiley), his first publisher (Harper Collins), and has kept his deck (the “Alchemcial Tarot”) in the public eye since its inception. He credits the Anima Mundi with his flow of success, as it is speaking through the cards, and not him.

Place is known for his ability to research, and this shows up well in his chapters on the history of alchemy and the history of Tarot. In the history of alchemy, he covers things like the same symbol meaning different things in different texts, alchemy’s Egyptian origins, the myth of Osiris, Greek alchemy. Hermes Trismegistus, the Seven Hermetic Concepts, the Emerald Tablet, Arabic alchemists, European alchemists, Renaissance alchemy, the Rosicrucians, Jung and Psychological alchemy, and much more. All of which is accompanied by beautiful illustrations from ancient texts.

In Chapter Two we move on to the basic concepts of alchemy, including the numerical symbolism, the ,the Zodiac, and an Alchemical Mandala. As with the previous chapter, beautiful illustrations from ancient text are included. These two chapters alone give the reader an amazing schooling in the alchemical world!

Chapter Three presents the history of Tarot, from it introduction into Europe, the suit symbols as they varied from country to country, the early Italian decks, the creation of the occult deck, the Waite-Smith deck,

Chapter Four covers interpreting the allegory – the memory arts, the Trionfi, the three-fold allegory of the trumps (the three by seven theory), and the alchemical trumps.

Chapter Five covers the Minor Arcana. Place brings up something very interesting – that there are three ways of interpreting the Minor Arcana: (1) the four suit symbols and their associations, (2) symbolism stemming from the teachings of Pythagoras that are associated with the first ten numbers, and (3) the code of chivalry expressed in the hierarchy of the royal cards. There is quite a bit of interesting thought in this chapter, including a graph that correlates the suits with Jung’s four functions of consciousness.

Chapter Six takes us into the Major Arcana, or the cards of the Opus. Each of the cards shows a black and white illustration, a relevant quote, and a discussion of the symbols of that card as rendered in the “Alchemical Tarot”.

Chapter Seven moves into the cards of the four elements (the four suits). Each of the cards again shows a black and white illustration, along with a discussion of the card, and the symbolism as seen in the “Alchemical Tarot”.

Chapter Eight takes us into the area of divination, broken down into three types: (1) intuitive (dreams and visions), (2) inductive (omens), and (3) interpretive (lots). Place uses three cards in each position, reading them as a statement, or story. He points to the three-fold structure as having archetypal significance – to the Pythagoreans, three defined the points necessary to make the first geometric form, and begin creation.

Place goes into depth on the seven patterns of a three card reading (linear, choice, meeting, central origin, central destination, central problem, and central teacher. He then presents a relationship reading, and a transmutation reading, using this method.

This is a working “bible” for the “Alchemical Tarot” decks, as well as a research quality book for both alchemy and the Tarot. The presentation of reading with three cards is a huge bonus, and not to be taken lightly! I highly recommend this book as an excellent addition to any Tarot (or esoteric) library.

Posted by Bonnie Cehovet on May 25, 2012 in Uncategorized

I wanted to create a spread that I could use whenever I wanted to step back, ground and center myself. See what you think!

Out of 78 cards, and four different suits, I managed to pull three cards from the same suit. What are the chances of that? (Not a math major here, but even I know the chances are very, very slim!) I am definitely looking at issues in the physical world, which does reflect my life as I see it. I decided to use the Comparative Tarot technique – that is, to draw the original spread from one deck, and then take the  same cards from another deck for comparison. I used two decks that to me each have strong voices, to see what would happen. I like these results!

I see myself as being able to handle the day to day of life – to make and implement decisions that are beneficial for me, and that will take me where I want to go. I can accept taking risks (what I term “calculated risks”) to get where I want to go. I have not allowed the world to overwhelm me – I am able to deal with it.

What is being hidden from me is the form that my journey is taking. My creative self will move me in directions that are as yet unknown. I need to ground myself, and create from my very soul.

How I merge my ability/need to control the day to day of life with the need to step out and create is in my ability to walk my talk, to balance all things, and walk in harmony with life. Know that I am on the right path.