Tag Archives: Tarot of the Apocalypse 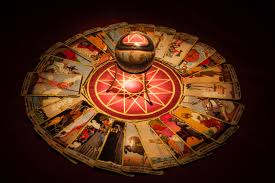 Tarot 2014 … changes, growth, and new paths within the Tarot world. I will be doing a once a month blog that wanders around and hits the highlights pertinent to whatever is crossing my path. Both Tarot and other divination systems will find their way here … I hope that you will find something that interests you, and perhaps pushes a few boundaries!

I have watched the growth of a good friend of mine for several years now … and she has achieved some amazing things! Her name is Mary Nale, and she is the founder and editor of Attune Magazine, and Attune Radio. She also writes a blog, and features articles on the Attune Magazine site – AttuneMagazine.com. She is the creator of three divination decks – Messages, A Deck For Channeling; the Purple Lenormand; and the Runes Deck. Mary hosts a Saturday morning show on BTR (http://www.blogtalkradio.com/attunemagazineradio), a monthly show entitled Sessions (co-hosted with Brad Tesh and myself), and facilitates shows for Jean Maurie Puhlman and Maggie Lukowski (Personal Empowerment), and ReeNee Cummins (U Predict). Check out the Attune Magazine site,and see where you might want to contribute! Mary’s Facebook page is here.

A gentleman that I met through Mary Nale is certainly holding his own as far as talk shows goes! His name is Tidal Miller, and he hosts the  “Alchemical Artisans Hour” on PEN (Paranormal Encounter Network). You can also find him on Facebook. Tidal has a great sense of humor, and seems to know all of the right questions to ask! It was a pleasure to be interviewed by him! This is a gentleman to keep your eye on!

That breeze that just swept by you was Theresa Reed! Theresa, aka “The Tarot Lady”, is a professional Tarot reader, teacher, and mentor (especially for growing Tarot businesses). Her mission is to empower people ,,, and she is quite successful at doing so! She also writes a blog that appears on her site … and pulls no punches! Theresa’s Facebook page is here.

Tarot apps are becoming my favorite things! Two of the top companies that I know about are The Fool’s Dog (Jason & Caroline Kenner), and Tarot eCards  (Ron Leong).

Two new decks to check out are the Syzygy Oracle (Heather Mendel), and the Tarot of the Apocalypse (Magdalena Walulik and Swiatoslaw Nowicki).

For a comprehensive study of Tarot (especially the Continental style Tarot), take a look at Christine Payne-Towler’s Tarot University Arkletters. Christine and her partner, Michael Dowers, are the creators of a unique Continental-style deck entitled Tarot oft he Holy Light.

Last, but not least, an adventure! Tarotist and transpersonal counselor Toni Gilbert is holding the first ever Northwest Astrology and Tarot Salon this November in Breitenbush Hot Springs, OR. This four day workshop will include presenters James Wanless Stephanie Arwen Lynch, Paul Nagy, Isha Lerner, Christine PayneTowler, and Robert Volkmann. I will be there too … hope to see you there!

Posted by Bonnie Cehovet on January 1, 2014 in Tarot