“Come Hell Or High Water” is a trilogy that blends medieval Eastern European history with Tarot and the occult in a very believable manner. Stephen Morris is just the man to write this book – he has degrees in medieval history and theology from Yale University and St. Vladimr’s Orthodox Theological Academy, and has previously written on Late Antiquity and Byzantine church life.

While I am not necessarily a fan of occult/paranormal writing, I was interested in the Tarot and occult background in this book, as well as the setting … Prague in the 1356 and 2002. Those of us in the Tarot world have seen facets of Prague, thanks to the fact that this lovely city is home to Baba Studios, creators of some of the best Tarot decks and books that I have ever seen.

This is a book that you just do not want to put down! It is all about the past, and how the energy from the past lives on in the present. It begins with a flashback to 1356, where we see mob mentality at its best. Fen’ka, a wise woman who lives in isolation at the edge of town, is dragged into the Old Town Square, accused of witchcraft, and burned at the stake. She doesn’t go easily …  as she is burning, she brings down a curse on the town and its inhabitants.

From there, we are brought back to current times – 2002 in New York City. Magdalena, a young woman who works at a boring job with the University of Prague, is visiting the city. She is drawn to the signs for Tarot readings, and finally walks into a storefront to get a reading. The reader, an older woman, gives her a three card reading, showing the past (why she came to visit New York City), the present (what she hope to get from her trip), and the future (what she is looking for). Magdalena is warned that she will be offered help, but that the help may come at a price that is too great.

Back in Prague she discovers the ghost of Fen’ka, and agrees to help her get justice. Before this Magdalena and her friends have read the Tarot amongst themselves. But really don’t have a good understanding of it, or of other metaphysical/occult matters. As she delves deeper and deeper into the occult, Magdalena meets the spirit of Madame de Thebes, a fortuneteller that was murdered by the Nazis. In order to communicate with Madame Thebes, Magdalena has to break a spell that the Nazis placed on her. Under the bridge where she met the ghost of Madam Thebes Magdalena is told that she will need the help of Flauros and Halphas in getting justice for Fen’ka.

At the same time, in her 9-5 world Magdalena is given the opportunity to manage a set of conferences that her university is hosting on “Evil and Human Wickedness” and “Monsters and the Monstrous – Legends of Enduring Evil”. Little does she know that this is where she will meet the manifestations of Flauros and Halphas!

The chapters move between the 1300’s and 2002, exploring the legends of medieval Prague as well as modern day Prague. The characters are quite in depth, showing the cultural mores of the time, the social levels, the influence of the church and the guilds, and much more. What is presented is believable … at times very scary, but also very believable! Several of the chapters are named after Tarot cards, and accurately carry the energy of that card into the story.

This is a well researched book, from the point of view of medieval history, the Tarot itself, occult practices, the church, and the psyche behind what motivates people to act as they do. As we move deeper into the story, we realize that part of this is about Magdalena, and her search for power (and what price she is willing to pay for it).

The plot is well presented, up until the reincarnations of Flauros and Halphas present themselves to Magdalana. I still liked the storyline, but found it  not as well presented, and possibly less plausible. However, I still recommend this book to those interested in the Tarot,Prague, medieval history, and just a good story in general.

I am looking forward to reading the next two books in this series! A evil force has been unleashed, and I want to see what it is going to do!

Review – A Guide To Tarot and Relationships

A Guide To Tarot and Relationships

“A Guide To Tarot and Relationships” is a very well thought out book, illustrated with imagery from Dolores Fitchie’s “Gorgon Tarot”. Together, they make a very positive statement about what Tarot can do when readings are focused. In this case … the focus is on relationship. The imagery in the Tarot allows the reader to focus on and identify key issues within the relationship, and what energy is there as a “help”. Through the cards, the reader is able to see developing patterns within relationship, and use them to explore and find answers.

Several spreads are presented at the beginning of the book, including a five card Soulmate Spread, a two card Ratio 1:1 Spread, and a one card Timing Spread, with sample interpretations.

There are tips presented for choosing deck. Reading the Tarot, and preparing for readings. Molina also presents basic information on the seven chakra’s, the numbers one to ten, and the elemental associations for the four suits.

The cards are divided into Major Arcane, the Seasonal Arcane (The Aces), the Pips (numbers Two through Ten), the Royalty Cards (the Kings and Queens), the Court of the Knights, and the Court of the Pages.

Each card is presented with a black and white image from the “Gorgon Tarot”, a key phrase, the associated planet, the planet’s ruler, the associated chakra, and the location of the chakra. This is followed by a discussion of the card, its Metaphorical meaning, its General meaning,

A Questions Statement, an Affirmation, and a suggested time frame for the card.

From the book, for The Fool:

This relationship is like traveling to a new country where you’ve not been before, and never experiencing the actions and the events that took place to get to the new location. Faith and excitement lead to a path of new experiences.

General Meaning For the Fool:

What’s one thing that brings you fear in your relationship?

Self-awareness allows me to pay attention to the details of my emotions and behavior.

This book gives the reader a place to start with relationship readings, and shows how the general information about the card can be focused on a specific area and situation. This book would be relevant for beginners as well as seasoned Tarot readers.

My one quibble with this book is the coloring on the back cover – older eyes cannot read that small red print set against black! 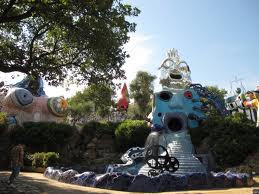 My friend, Tarotist and artist Arnell Ando, along with her husband, Michael McAteer,  will be leading a 14 day Tarot and History Tour to Northern Italy this fall (September 26th through October 10th), Inspired by the late Brian Williams the tour will include the following:

* A private viewing of the original Visconti-Sforza Tarot cards at the Accademia Carrara.

* Viewing an ancient astrological clock (ca 1583), and the Dance of the Dead fresco.

* A visit to the Visconti/Sforza castle.

* A visit to Milan;s grand Gothis Cathedral and the famous Plaza Galleria Vittorio Emanuele. (Arnell is also whispering something about a cool Milanese esoteric shop!)

* Visits to the frescos of Palazzo Schifanola. and the amazing artowrks of the Duomo museum of Ferrata.

* An ancient Isis temple with ties to Jerusalem.

* A special garden party at the Tarot museum hosted by Morena Poltronieri!

* Visits to the cities of Siena and Florence.

I will bring you more exact information (such as where to sign up!) as Arnell puts it up! What a tour this is going to be! The tour will include all hotel accommodations, all breakfasts, transportation within Italy (private tour bus),  scheduled events and tour fees, and all but two dinners.

This is a spread that I developed for Pamela Steele’s Tarot Deck Creator’s Group. We were asked to contribute a spread for New Year’s, if we wished to, and to use the theme “Release and Attraction”.  We are going to be reading with each other’s spreads, but I wanted to try out my own spread! So, here we go, using Pamela’s “Steele Wizard Tarot”.

6.         What strengths will allow me to make the best of my opportunities? The Lovers

Posted by Bonnie Cehovet on January 1, 2013 in Tarot